Significant songs that you don't care about.

Reviewing this latest chart, I find it contains several cover songs, remakes and remixes. Let’s work our way from the bottom to the top.

Debuting at #19 this week we find a remix from Elton John paired with singer Dua Lipa. The song is a mash-up of previous Elton John tracks rolled into a new title… “Cold Heart”. In this catchy remix you can hear snippets from the following Elton John songs: “Rocket Man”, “Sacrifice”, “Kiss the Bride” and “Where’s the Shoorah”, the latter an album only track from Elton John’s 1976 release, Blue Moves.

Last week, Foo Fighters' disco persona Dee Gees debut at #20 with their cover of the Andy Gibb hit “Shadow Dancing”. That record moves up to #16 this week. The song previously went to #1 on the Billboard Hot 100 in 1978 for several weeks.

Save Your Tears - The Weeknd & Ariana Grande (remix)

Another remix on our chart is the “oldest” song with the most accumulated weeks on. “Save Your Tears”, the remix version featuring The Weekend and Ariana Grande have been listed on the Current Top 20 since late April and is a re-hash of The Weeknd’s still current solo hit of the same title. Both went to #1 on this chart earlier this year. I refer to them both on my weekly listing, placing “Save Your Tears” at #14 for a second week.

Another song with similar treatment is Paul McCartney’s “Find My Way”, which in its original version topped this chart for a few weeks earlier this year. The remix version featuring Beck on most of the vocals moves up 2 from last week’s #15 to #13.

I Get My Kicks on You - Tony Bennett & Lady Gaga

The oldest song in terms of years of longevity is the Cole Porter penned “I Get My Kicks on You”. The song was written in 1934 and first premiered in the Broadway Musical Anything Goes, and sung in the movie version of the same play in 1936. The first person to sing the song was Ethel Merman. It was covered over many years by musical luminaries such as Frank Sinatra and Ella Fitzgerald.

The newest remake of “I Get My Kids on You” complete with the “cocaine” line is sung by 95 year old Tony Bennett with Lady Gaga. The song is from the duo’s upcoming album Love For Sale. It climbs from #16 of last week to #12 this week.

Nothing Else Matters - Miley Cyrus

At #11 we have a heavy metal song that has been wonderfully remade by Miley Cyrus and a bunch of her musician friends. “Nothing Else Matters” was recorded by Metallica for their famed 1991 album Metallica. This killer remake features Cyrus on vocals and backing musicians Elton John on keyboards, Yo Yo Ma on cello, Red Hot Chili Peppers drummer Chad Smith on percussion, Metallica’s Robert Trujillo on bass and Andrew WATT on guitars and producing. The dusty western themed video for the song is timeless. “Nothing Else Matters” peaked at #8 on the Current Top 20 a few weeks ago, and is now sitting at #11.

Somewhere Over the Rainbow / What a Wonderful World -

Our last cover song is a medley and remix. This remix covers two very famous the song, the first being “Somewhere Over the Rainbow” which was first immortalized in the 1939 movie The Wizard of Oz and sung by actress Judy Garland.

The second part of this remix medley is “What a Wonderful World” which was recorded in 1967 by jazz trumpeter and singer Louis Armstrong. Released as a single that year, the record failed to chart on the Billboard Hot 100, even though it went to #1 in the U.K.

Armstrong’s recording of “What a Wonderful World” appeared in the 1987 Robin Williams movie Goodmorning Vietnam. The song was re-released as a single in 1988. It finally hit the Billboard Hot 100 peaking at #32. It was subsequently inducted in the Grammy Hall of Fame in 1999.

In 1988 both “Somewhere Over the Rainbow” and “What a Wonderful World” were combined into a medley and recorded by Hawaii's Israel Kamakawiwo’ole.

The simple ukulele version of the “Somewhere Over the Rainbow / What a Wonderful World” medley became a big hit in Hawaii during the 1990s. The song’s popularity increased after Israel Kamakawiwo’ole’s death in 1997.

Awareness of the song spread with the use of the internet and streaming audio. The song became a popular digital track all over the world and was used in numerous movies and TV shows since the early 2000s.

This year (2021), “Somewhere Over the Rainbow / What a Wonderful World” is back as a new pop / electronic dance remix by German DJs and remixers Robin Shulz and Alle Farbin. This new remix is a very catchy pop tune which should be a hit everywhere again. It currently stands at #10 on the Current Top 20, up from last week’s #13 position. The medley's video appears at the top of this post.

Lastly, The Linda Lindas hold on to #1 for the 2nd week with their smash hit, “Oh!”, which is not a remake or remix.. though I suspect that if this becomes a big hit, a future remix could be inevitable.

The Killers place the new single "Quiet Town" on the top 20 for the first time this week at #19. It's from their newest album Pressure Machine.

The second of our two debut singles is a re-worked oldie from The Foo Fighters going under their "disco name" "Dee Gees." As the Dee Gees, the band released 5 songs written by the Bee Gees on their latest release Hail Satin. The first of the Bee Gee covers to make this chart is "Shadow Dancing" which was a #1 hit in 1978 for Bee Gee brother Andy Gibb.
The last surviving member of The Bee Gees is Barry Gibb. He recently posted on Twitter: "I am proud that @foofighters gave us love beyond the call of duty. I am overwhelmed that they would even think about doing this. @FooDGrohl, @taylorhawkins and the rest of you guys, thank you so much. I look forward to us getting together!!!" - https://twitter.com/GibbBarry 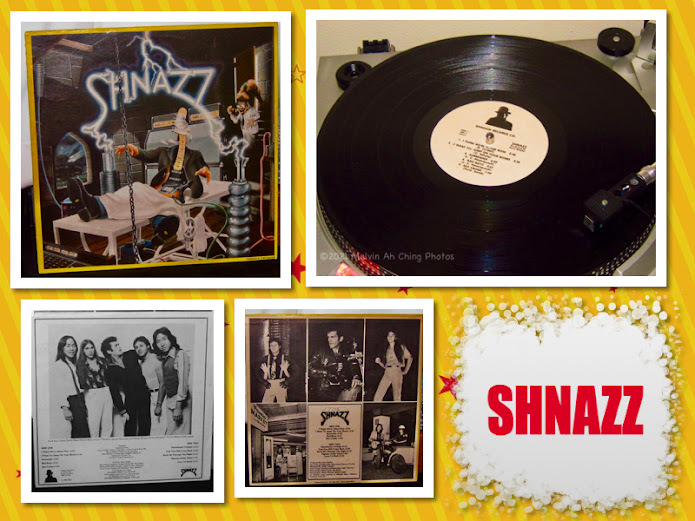 I Want To Jump on Your Bones
#TBT Thursday - Today's Vinyl Spin - SHNAZZ - "I Think We're Alone Now" - they were a local band that was on the verge of a national breakout. The cover of the old Tommy James & the Shondells hit got a bunch of radio airplay in 1980. The album had a bunch of party rockin' songs including "Bad Boys", "I Want to Jump on Your Bones", "Can You Still Come Back" and the instrumental, "Pignose Under Glass". The record was never issued in a digital format. It came out in a standard LP and cassette. "I Think We're Alone Now" b/w "Bad Boys" was also issued as a single 45, which I also have in my collection.
The members of Shnazz included  Fritz "The Fritz" Hasenpusch on vocals/harmonica, Frank Kam on guitar/vocals, Roger Holland on bass/vocals, Art Galvan on drums, vocals, percussion, and Vernon Sakata on guitar, vocals.
I was lucky enough to see them perform for free at King's Alley in Waikiki back in either 1980 or 1981. I read years ago that around 1981 they were signed to a major record label and were supposed to release a follow-up to this record. It never happened.
Here is a clip of them doing "I Want to Jump on Your Bones" and "I Think We're Alone Now." 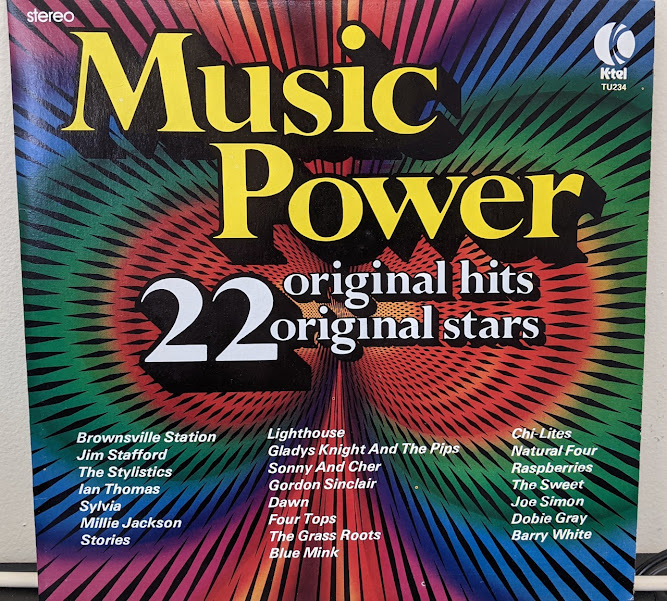 (cue screaming DJ and music):
K-Tel presents MUSIC POWER - 22 ORIGINAL HITS 22 ORIGINAL ARTISTS
The latest hits from 1974 and earlier are on this wonderful single record LP including "Smoking in the Boys Room" by Brownsville Station, "Rockin Roll Baby" by The Stylistics and "Keeper of the Castle" by The Four Tops.
Who can forget the wonderful hits "Oh Girl" by The Chi-Lites, "Pretty Lady" by Lighthouse or the always classic "Drift Away" by Dobie Gray?
These songs and many more are on this obsolete K-Tel collection of unforgettable hits and vinyl obscurities, yours to find at your nearest thrift shop or used record store if you're lucky!
Remember all the grooves are squeezed close together with many of the tracks severely edited for time constraints of the vinyl record format.
Hunt for your own copy of MUSIC POWER online or in your city or town today! ONLY FROM K-TEL.
See photos for complete track list. (fade music out)
Disclaimer: No Ginsu knives available with this offer.
Editor's Note: I bought this record album for only a dollar at our local thrift shop. I always wanted to own at least one K-Tel album, despite the dubious song edits and lousy sound. 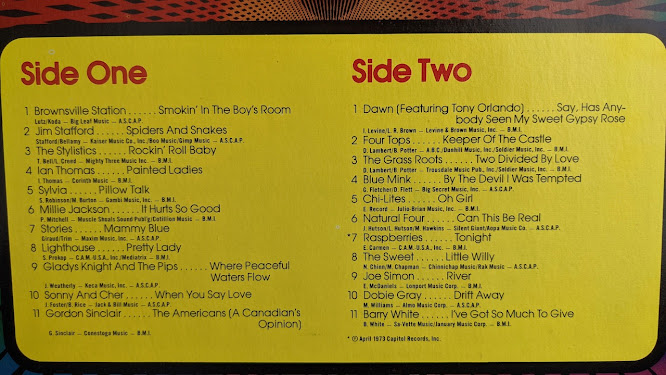 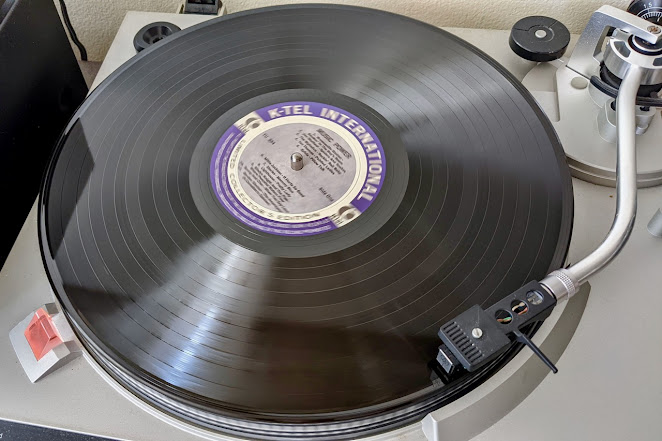 Significant songs that you don't care about.
As of August 5, 2021
TW - Song Title - Artist - LW
1. Bad Habits - Ed Sheeran - 1
2. Last Train Home - John Mayer - 3
3. Brutal - Olivia Rodrigo - 5
4. Good 4 U - Olivia Rodrigo - 2
5. Higher Power - Coldplay - 4
6. Wrecked - Imagine Dragons - 13
7. Solar Power - Lorde - 9
8. Save Your Tears (remix & single) - The Weeknd & Ariana Grande - 6
9. Leave The Door Open - Silk Sonic - 7
10. Lost - Maroon 5 - 10
11. Nothing Else Matters (featuring....) - Miley Cyrus - 8
12. Don't Go Yet - Camila Cabello - 19
13. Run Baby Run - Southern Culture on the Skids - 15
14. The Worst Country Song of All Time - Brantley Gilbert - 16
15. Oh! - The Linda Lindas - NEW
16. Skate - Silk Sonic - NEW
17. Permission to Dance - BTS - 20
18. Renegade (featuring Taylor Swift) - Big Red Machine - 14
19. Find My Way (featuring Beck) - Paul McCartney - NEW
20. Somewhere Over the Rainbow / What a Wonderful World - "Robin Schulz, Alle Farben, Israel Kamakawiwo'ole - NEW
CHART NOTES
Ed Sheeran holds on to #1 for a third week with "Bad Habits."
We have three songs this week with a Hawaii connection. Two of them belong to Bruno Mars and his group Silk Sonic. At #9 we still have holder on "Leave the Door Open" with a new one debuting at #16, "Skate." Bruno Mars grew up in Hawaii and cut his earliest musical chops being a 4-year old Elvis Presley impersonator for his father's night club show.
The third record with a Hawaii connection is "Somewhere Over the Rainbow / What a Wonderful World", a medley made famous over time in its original from by the late singer Israel "IZ" Kamakawiwo'ole. For its revival it has been remixed by Robin Schulz and Alle Farben with the "Iz" vocals and ukulele still being present in this sped up remix. The record debuts at #20.
Speaking of remixes, we got a new old one from Paul McCartney. "Find My Way" is  once again on the chart this year with a new remix featuring the vocals of Beck. The track is from the McCartney III Imagined, a remix album that made it to #1 on the Billboard albums chart. The record debuts at #19.
Last but not least, we find The Linda Lindas, a rock group of young school aged girls belting out some very convincing punk rock. Their latest single "OH!" makes its debut at #15 on the Current Top 20. This will go higher than their first single, "Racist, Sexist Boy" which peaked at #14 a few weeks ago.
The video appears at the top of this post.\
Mel's Current Top 20 is on Spotify!
Posted by Mel at 6:55 AM No comments:

Significant songs you don't care about

Chart debuts this week include Camila Cabello at #19 with "Don't Go Yet" and another BTS single, "Permission to Dance" at #20.