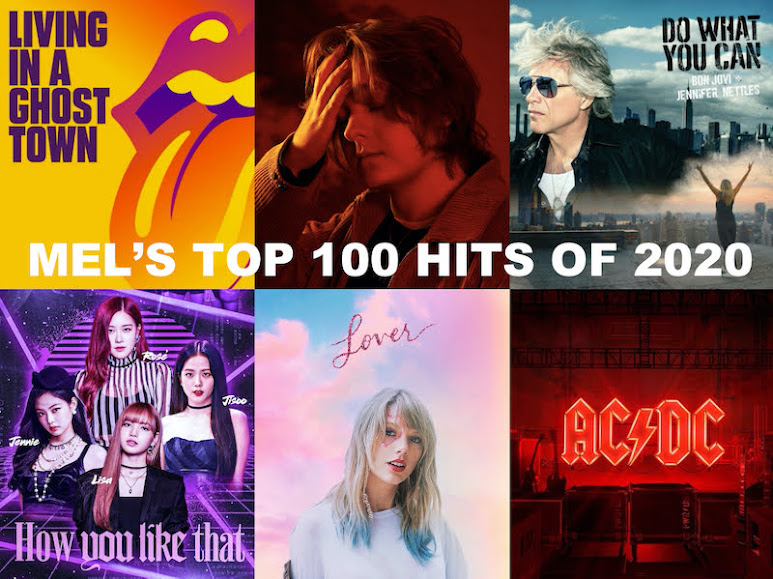 This year I reactivated Mel's Current Top 20 weekly chart. I decided to do this after 18 weeks of 2020 had already passed. The first chart was published during the week of May 7, 2020. The first #1 song upon reactivation was The Rolling Stones' "Living in a Ghost Town", which to me became the anthem of the 2020... the first year of COVID-19. The song was a reaction to the worldwide lockdowns, closure of many businesses and a new way to deal with everyday life.
"Living in a Ghost Town" held on to the #1 spot on my chart for 8 weeks, spending a total of 15 weeks on. It ended up being my #1 song of 2020.
Since I came up a bit short of songs for my year end chart, I had to mine several songs that came out in 2019 that I would have probably listed on the chart had it started in January. Hence you will see familiar titles such as Lewis Capaldi's "Someone You Loved" @ #2 and Taylor Swift's "You Need to Calm Down" at #5. I will call these holdovers from late 2019 that would have probably been on my chart. There are about a dozen of these songs on the Top 100.
Since this weekly chart contains only 20 positions, songs come and go through the chart fairly quickly, usually about 8 to 10 weeks, though several last longer. This year a song only needed to be listed at least for one week at any position to make it to the chart. Hence we got one week performers such as the Foo Fighters "Shame Shame" scraping in at the lower positions. Doubt that will happen next year.
Some interesting notes about the Top 100
The Rolling Stones' "Living in a Ghost Town" was barely a hit on most charts. I suspect it got some rock radio airplay. It went to #1 in Germany only, #2 in Scotland, and #61 in their native UK. On the U.S. Hot Rock and Alternative chart the single went to #3... which is not too bad for a niche genre.
Lewis Capaldi's "Someone You Loved" is a carryover hit from 2019 and its follow-up "Before You Go" were long lasting #1 hits on my chart. While not officially released as a single, the bonus album track "Let It Roll" went to #2 on my chart.
Taylor Swift had a big year, scoring 4 tracks on my Top 100 chart. Three of those were #1 hit.... "You Need to Calm Down" a 2019 carryover track, "Cardigan" from her Folklore album and just scraping in before the calendar flipped to 2021, "Willow" from her latest Evermore. "The Man" from her Lover album was a #3 hit with "Betty" from Folklore coming in at #7.
Only in Hawaii would Katy Perry's "Harleys in Hawaii" would go to #1. It did on my chart though it was a carryover from 2019. She also scored with "Daisies" and "Smile".
Rock had some big tracks this year... In addition to The Rolling Stones, AC/DC had a huge hit with "Shot in the Dark" from their latest album Power Up. Other rock songs that scored included Blossoms' cover of The Beatles "Paperback Writer", Tom Petty& the Heartbreakers "Leave Virginia Alone," Bruce Springsteen's "Letter to You", Sixx:A.M.'s "Maybe Its Time" and "Caution" by. The Killers.
One of the most unusual songs to make the Top 20 this year was a 43 year old single track from Fleetwood Mac's Rumours album. Stevie Nicks' "Dreams" made a big chart comeback after the song was featured in a viral TikTok video posted by Nathan Apodaca lip synching to it while riding a skateboard and drinking a bottle of Ocean Spray juice. The video has become legendary and sparked a host of imitators including Nicks herself and bandmate Mick Fleetwood. In 1977 "Dreams" became Fleetwood Mac's only #1 hit on the Billboard Hot 100. This year it got listed again on the Hot 100 peaking at #12, which is the same position that it made it to my Current Top 20 chart.
Paul McCartney scores two songs on the Top 100. "Home Tonight" is a carryover single from 2019 that went to #2 and his latest, "Find Your Way" just made it in this year by being a #10 hit for the second week on the chart (Dec. 31).
Several K-Pop songs made it to my Current Top 20 chart. The biggest was by K-Pop girl group Blackpink. "How You Like That" held on to the #1 spot during part of the summer for 4 weeks, good enough to place it at #4 for the year. They also scored hit singles with "Lovesick Girls," "Ice Cream" (with Selena Gomez) and "Pretty Savage". All of the tracks were featured on their debut LP The Album.
The other K-Pop group to hit the charts this year was boy band BTS. They had a #1 hit with "Dynamite" and came back with another record called "Life Goes On".
These are just some of the songs worthy of my mention. There are plenty more. Just check out the video playlist and chart below.