Nohelani's First Album to Be Re-released 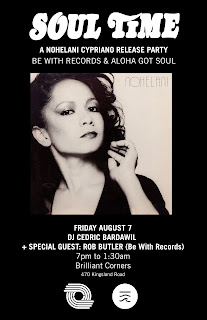 From the Aloha Got Soul record label comes this in my email:

"Five years ago I launched this niche music blog simply because I wanted to document some of the cool music that came out of Hawaii during the 1970s.


Nohelani Cypriano's 1979 debut is one shining example of such music.

It's 2015 and Aloha Got Soul is working with Be With Records to reissue Nohelani's debut for the first time ever on vinyl, available August 7th.

Be With founder Rob Butler and Aloha Got Soul ambassador Cedric Bardawil are hosting a release party at Brilliant Corners in London—and you're invited.

Join us as we celebrate on Friday, August 7th for a night of amazing tunes including Hawaiian grooves, summertime sounds and island jams.

First off I definitely remember this album being released on vinyl in 1978 or 79 about a year after Nohelani Cypriano hit it big in Hawaii with her Homegrown II  hit, "Lihue".

Certainly, the album has been out of print for a while. It is good to know that it is being re-released again on vinyl. The album has long been available on CD and digital formats.

Kind of odd that the record release party is in London, UK. I guess Nohelani is popular there or perhaps there are more vinyl fans in the British Isles. Regardless I am sure this record will be also available in Hawaii.
Posted by Mel at 5:56 AM No comments:

Music Videos That Are Fun to Watch

This blog has been an absolute failure in recent weeks with no posts since May 27. Oh well, hopefully things will change as I have now decided to post some interesting, hopefully new YouTube videos that I have recently found.

To kick this off, I offer 3 new music videos from YouTube that I have found for your viewing and listening pleasure. In no particular order here they are:


Kevin McKnelly is probably best known for his song that was included on the Once Bitten movie soundtrack, "You're On My Mind" which came out in 1985.

In what is billed as his first music video McKnelly is back as "the world's oldest rapper" with " I Want You - I Want You Now". The track prominently features his 91-year-old father in a walker surrounded by 4 young dancing women. McKnelly also appears on the dance oriented track rapping about Imelda Marcos, shoes, happiness and consumerism. The song is lighthearted fun.

"Dumb" by The Heydaze

I know nothing about The Heydaze, but apparently they are relatively new and more than likely fit into the often maligned "boy band" mold. However they are not a vocal group and by the looks of this video, they actually play instruments.

"Dumb" is a catchy tune that could use more airplay to become a bonafide top 40 hit. The video is interesting enough to keep me watching as the group members get pelted with a variety of substances by an attractive young woman. Not exactly groundbreaking but like the previous video, "fun"!


Speaking of fun, the new video by Ladybaby actually made me laugh the first time I saw it. This track was released last week and it already has close to a million hits if not so already. The song has elements of sugar-sweet J-Pop mixed with growling heavy metal.

The unlikely mix of music styles is attributed to Australian heavy metal singer and pro wrestler Richard Magarey who goes by the persona "Ladybeard". He's immediately identifiable by wearing a dress like his two teenaged counterparts Rie Kaneko​ and Rei Kuromiya​ who provide the sweet female voices opposite of his grungy guitar backed growls.

As unlikely as the music mix is, the video is quite a novel fun romp promoting Japanese consumerism. It is also the first video that I noticed that makes extensive use of cameras mounted on selfie sticks.