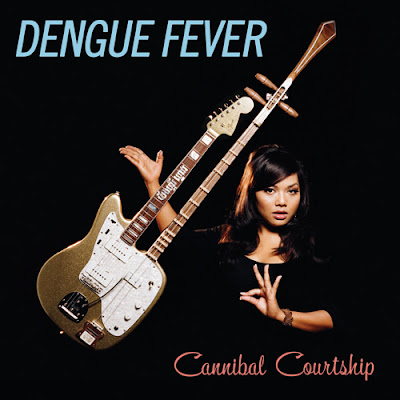 Listen to "Cement Slipppers" by clicking on the player below:

CHART NOTES
Dengue Fever moves into the #1 spot with their lead off single from their forthcoming album Cannibal Courtship called "Cement Slippers". The song has been a free download off the Dengue Fever website for weeks now and precludes the April 19 release of the new album. Listening to the sample tracks off the new album has me excited about getting it on the first day out. I've become a fan of Dengue Fever since I was made aware of them late last summer. Saw them in concert on October 30, 2010. Love their music. "Cement Slippers" could be their big breakout single. Reminds me somewhat of the old "Rock Lobster" song from the B-52s.

Elsewhere on the chart: Not much upward movement in most of the songs this week. Foster the People break into the top 5 this week with their hit "Pumped Up Kicks". The song moves up 2 from #7 to #5. Most of the other songs on the top 20 make small incremental moves up by 1 or 2 notches.

Songs taking signifcant falls this week include The Decemberists' "Down By the Water" dropping from #5 to #10. This was a former #1 record. Also dropping big is "Hands" by The Ting Tings. They drop 5 from #10 to #15. The Ting Tings have been on this chart with "Hands" since the fall of 2010. Looks like this could be their last week on.

The two debut songs for the week are "I Do" by Colbie Caillat at #19 and "Machu Picchu" by The Strokes at #20.


VIDEO SHOWCASE
This week the spotlight is on Dengue Fever. Enjoy!

DENGUE FEVER - Only a Friend

On the Charts This Week

CHART NOTES
Jessie J holds on to the #1 spot for the second week in a row with her big hit, "Price Tag". Dengue Fever climbs 2 points moving from #4 to #2 with their single "Cement Slippers". Lady GaGa moves up 1 point from #5 to #4 with "Born This Way".

Rihanna also debuts this week with a second single, "S&M" at #20. Last week she debut with "Who's That Chick" at #20 which this week moves up to 17. Kind of unusual to have an artist with 2 relatively new songs chart at the same time on the WT20.


This cover version has gotten more hits than the official version from Lady GaGa.
Posted by Mel at 4:30 AM No comments:

CHART NOTES
Jessie J, who hails from England tops this week's chart with her debut hit single, "Price Tag". The song has been steadily climbing he chart and this week, nudges in from #2 to #1. It's a great pop song with a tasteful rap thrown in by rapper B.o.B. who I have been told is known for his radio friendly hits. You can listen to this song and check the video out below.

New songs making it to the top 20 this week include "From a Table Away" by new country artist Sunny Sweeney. That record checks in at #19. At number 20 is Rihanna with a dance track called "Who's That Chick".

Fastest rising song this week is Jennifer Lopez and Pitbull's single "On the Floor" moving up from #18 to #11. Certainly this song will be in the top 10 by next week. It already topped the digital singles chart at both iTunes and Amazon.com.

CHART NOTES
The Decemberists hold at #1 for a 4th week with their hit single, "Down By The Water". The track is taken from their latest album, The King Is Dead.

Jessie J moves up another notch from #3 to #2 with "Price Tag". The Ting Tings move back up one from #5 to #4 this week with "Hands". They peaked with this song at #2 a few weeks ago. Showing up for the first time in the Top 5, Mumford & Sons also move up one with "Little Lion Man", at #5.

Breaking into the top 10 this week are Dengue Fever at #7 with "Cement Slippers", and Group 1 Crew with "Let's Go" at #10. Just outside of the top 10 Foster the People move up 2 with "Pumped Up Kicks" at #11 while Francesca Battistelli checks in at #12 with "This is the Stuff", up from last week's debut position of #19.

From 1993 it's 10,000 Maniacs with Natalie Merchant singing the Bruce Springsteen cover of "Because the Night", a song that became popular in 1978 by Patti Smith.
Posted by Mel at 9:00 AM No comments: