Two big movers leap 10 points in their second week. The first is "Catalonia" by Vance Joy, up from #19 to #9. Right behind him is the revival track of "Running Up That Hill," from Kate Bush, also up ten from #20 last week to #10 this week.

Right behind them is Envy of None with "Never Say I Love You" which was #18 last week and now #11 this week.

Two debut songs: "Break My Soul," the latest from Beyoncé is at #19. The lyric video for that is below. The showcase video this week is from Demi Lovato. It's her rock track "Skin of My Teeth, " first week on at #20.

For Beyoncé, we only have the lyric video for her chart debut.

Significant Songs You Don't Care About

Cannons hold at #1 for a second week with "Hurricane," a track from their album Fever Dream. Lady Gaga's former #1 hit "Hold My Hand" from the Top Gun: Maverick soundtrack album holds at #2 this week.

As stated at the top of this post Rina Sawayama released a new video to her current hit "This Hell, " which moves up this chart from #13 to #10.

One of my favorite new songs this week is "Catalonia" by Vance Joy making its debut at #19.

I am all for old songs making a chart comeback when new audiences discover them.

Significant Songs You Don't Care About

Radio Free Hawaii was a Honolulu/ Oahu based radio station broadcasting on KDEO 102.7FM through a time brokerage agreement with then station owner Robert Loew and operated by "Sheriff" Norm Winter who also owned Jelly's Books and Music at the time. The station was in operation from 1991 to 1997 with a brief hiatus and format change for a few months in late 1994. 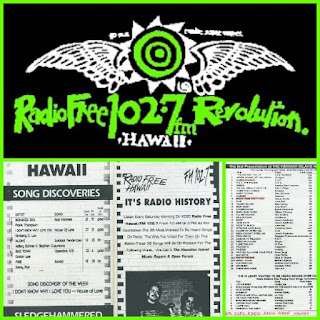 The core of the radio station's programming came in from weekly votes sent in by the listeners. The votes were compiled and a playlist was presented every Saturday morning during the station's run through most of the 1990s. It assured that the station would present a very eclectic mix of music ranging from rock, pop, alternative, metal to hip hop, oldies, reggae, country, Hawaiian, and even classical.

During the countdown show, the "Song Discovery of the Week" would be recognized. The most hated song of the week would also be "sledgehammered off the air forever" by Sheriff Norm Winter.

If you like this, I will occasionally be posting some of the Radio Free Hawaii charts as well as a corresponding Spotify playlist.

The following chart, video and Spotify link is the first of several that we will be presenting on this blog. Enjoy!

Here are Some of the Songs Not on the Spotify Playlist 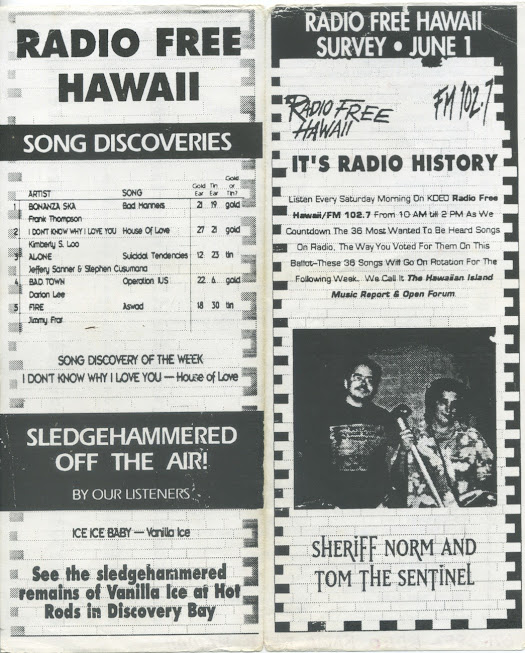 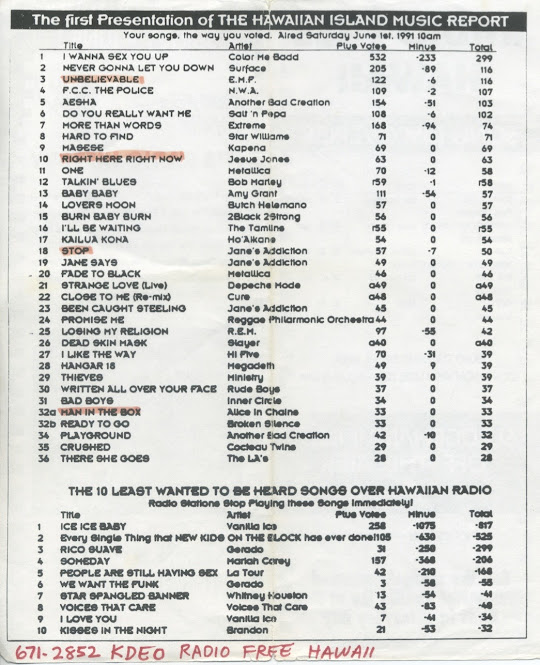 I haven't done one of these in a while. There is a page with a weekly rolling chart, but for the record I just want to start resuming (again) the weekly chart posting. A lot of the older charts that I have posted are archived at the M4B Personal Chart site under my username macprohawaii. I have been posting personal charts off and on for quite a lot of years, first on paper and then later online. The old paper charts were long ago tossed, before the internet became a thing.

Here is the chart for this week.

Since my last report, the #1 song has changed several times in the past few months. The current #1 song is from the Top Gun Maverick soundtrack. It has been #1 on this chart for three weeks in a row. That song s "Hold My Hand" from Lady Gaga.
The video for the song appears at the top of this posting.
The only debut song to the chart is "No One Dies From Love" by Tove Lo at #19. The video for that is below.
Be sure to also visit our Spotify page.
Posted by Mel at 8:02 AM No comments:

THE TOP 25 MOST SCROBBLED BEATLES SONGS