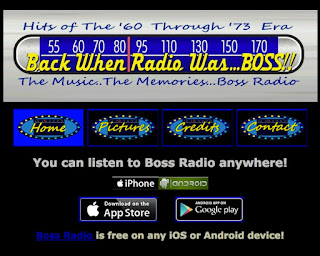 While it is not exactly the old KHJ "Boss Radio" of old (no live DJs), this radio stream I first found on Apple's iTunes Internet Radio tab is kind of like no other oldies audio stream. Surely, they play much of the same old stuff as other streaming stations.

Boss Radio Online however streams blocks of music of one specific year per hour. So like if you stumble into a block, you may be locked in to say 1961 or 1970. It depends on the time of day you listen to a stream.

Needless to say, I like Boss Radio Online even without any live DJs. You get the old style jingles such as "And the Hits Just Keep on Coming" along with the same style of bumper music you remember as a kid.

Since this is a streaming station (broadband internet required), unlike the old AM band of yore, there is no static. The music is all original with most tracks presented in full stereo sound. Nice.

Some of the early year webcasts also include music inserts from years prior to the targeted time span (1961 to 1973) presented on Boss Radio.

All you need to listen to Boss Radio Online is a browser pointed to the following URL on your computer or device:

Boss Radio Online is also available on the iTunes internet radio tab as well as through free downloadable apps for your Android and iOS device. Access to the stream is FREE! A great bargain.

I will be posting set lists on occasion.