Here is a re-cap and review of some of my favorite songs and albums that were released in 2008. All of the songs listed on my chart below initially appeared on my Weekly Top 20 list that I maintain throughout the year. I'm largely a singles kind of guy, and even though I buy a lot of albums, I tend to listen to a mixed assortment of tracks whenever I have a music device playing. This is made easier with a combination of Apple's iTunes, iPod and other media players.

Kid Rock's "All Summer Long" which is a derivative of 2 classic rock tracks, "Sweet Home Alabama" by Lynyrd Skynard and"Werewolves of London" by Warren Zevon stood out as one of my favorites for 2008. Rock cleverly combined elements of both to craft an almost entirely new song that borrows a lot from both. This is probably the first hybrid song of its kind that I truly liked. Surprisingly, it only made it to #7 in my year-end wrap, largely because it held on to #1 for only 3 weeks and did not spend that much time on my weekly chart. 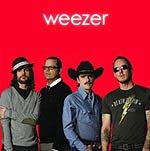 For geek rock, nothing came close to Weezer whose red album echos songs from their green, black and blue albums of years past. If you like tracks such as "Buddy Holly," "Say It Isn't So", "Island in the Sun" and "Beverly Hills," you certainly bought and enjoyed Weezer's red album. The leading tracks for me were "Pork and Beans," "Troublemaker" and "Heart Songs". Weezer took the pork straight to #1 on my personal chart and ended up with my song of the year. "Heart Songs" is the band's recollection of artists and hits from years gone by. A brilliant album track that never made it to my weekly chart.

I liked R.E.M.'s album Accelerate. It was a return to their rock style of the past. It proved a winner on my chart as "Supernatural Superserious" burned its way to the #1 position and stayed there for 4 weeks. Other good tracks include the title tune, "Man Sized Wreath" and "Hollow Man".

A lot of young ladies burned up my chart with an assortment of tracks. Marie Digby was a fave with "Fool", "Say It Again" and "Umbrella" the latter being a hit for Rihanna in 2007. I also grew to like a lot of Rihanna's tracks. She can sing soul, R&B and even rock n roll. Favorites this year included "Disturbia," "Take a Bow" and "If I Never See Your Face Again" in which pairs her with the band Maroon 5.

My favorite albums of the year include those listed above as well as Sheryl Crow's Detours which produced the hits "Love is Free," "Gasoline," and "Out of Our Heads", Coldplay's Viva La Vida, Ringo Starr's Liverpool 8, Metallica's Death Magnetic, and the debut album from Lenka which yielded the tracks "Trouble is a Friend" and "The Show".

I heard some of my favorite tracks on TV commercials before they became hits. These included Apple iPod promotional tunes that became hits: "Music is My Hot, Hot Sex" by CSS from late 2007, "Bruises" from Chairlift that promoted the iPod Touch, "Shut Up & Let Me Go" by the Ting Tings and "Around the Bend" by The Asteroids Galaxy Tour which went to #1 on my Weekly Top 20. Noah and the Whale hit #1 in 2008 with "5 Years Time," a track used in a Saturn car commercial.