Carly Rae Jepsen moves up another spot this week from #2 to #1 with her hit single "Call Me Maybe". The song lingered at #3 for more than 4 weeks late this spring before moving to #2 last week. This week Ms. Jepsen sit at the top of the chart.

Eric Hutchinson's "Watching You Watch Me" moves back into the #2 spot after slipping to #3 last week. The runner-up position is the current peak of this preppy but somewhat bittersweet song.

Elsewhere in the top 20 we got Adele moving up 2 from #8 to #6 with her single "Set Fire to the Rain". I like the intensity of this song.

Moving into the top 10 we find Demi Lovato's "Give Your Heart A Break" moving up from #14 to #9. She is followed by the week's biggest mover, "Wide Awake" the latest single track from Katy Perry bolting from #17 to #10.

The only debut single this week is Matchbox Twenty's "She's So Mean" coming in at #20.

The two debut songs on this week's chart are fairly far from mainstream. "Hold On" byAlabama Shakes at #19 is one of those kind of records that take time to grow on you. Their sound kind of reminds me of Mumford & Sons but with a female vocalist and a husky voice. The other chart debut is by Shannon Hurley who has an internet following and has explored different music genres including pop, folk, electronic and dance. Here she remakes Donna Summer's 1977 classic "I Feel Love" and spins it very nicely. Number 20 this week. In 2009, Shannon Hurley took her single "California" all the way to #1.

It seems like only yesterday that “When I’m 64″ became a reality for Sir Paul McCartney, but today, he hits an even bigger milestone: turning 70. Of course, the Beatles legend hardly looks or acts his age, since he continues to remain a vibrant force as both a...

Happy Birthday Paul and thanks for all the music you have given to us over the years. May more songs come in our future! 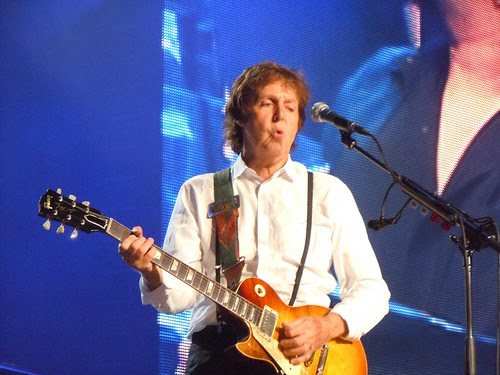 Maroon 5 holds at #1 for a third week in a row with their latest single "Payphone". Question this week... can it hold on to #1 for a 4th week. Below them, the top 5 remains relatively the same with Eric Hutchinson holding at #2 with "Watching You Watch Me" for a 3rd week, and Carly Rae Jepsen still holding at #3 with "Call Me Maybe" for what, a month now?

One Direction's "What Makes You Beautiful" changes places with Gotye's "Somebody That I Used To Know" at #4 and #5. Gotye's single held the #1 spot for 5 non-consecutive weeks this year.

Adele makes a big jump from #16 to #10 with her chart delayed single "Set Fire to the Rain". The song made its first chart appearance only last week (after having been listed on numerous charts for months elsewhere) at #16. Meanwhile her last hit is on the wane. "Rumour Has It" slips from #8 to #13 this week.

Three singles make their chart debut this week. They include Alanis Morissette's "Guardian" at #18, The Beach Boys' "That's Why God Made the Radio" at #19 and Katy Perry's "Wide Awake" at #20. Perry's last hit single, "Part of Me" just fell off the chart this week.

Maroon 5 holds at #1 for a second week in a row with their latest single "Payphone". When was the last time you used a payphone?

Two songs make their debut this week. They include "Give Your Heart a Break" by Demi Lovato at #19 and "Set Fire to the Rain" by Adele, a latecomer to this chart at #16. She still has "Rumour Has It" on the chart, down to #8 after peaking at #5 last week.