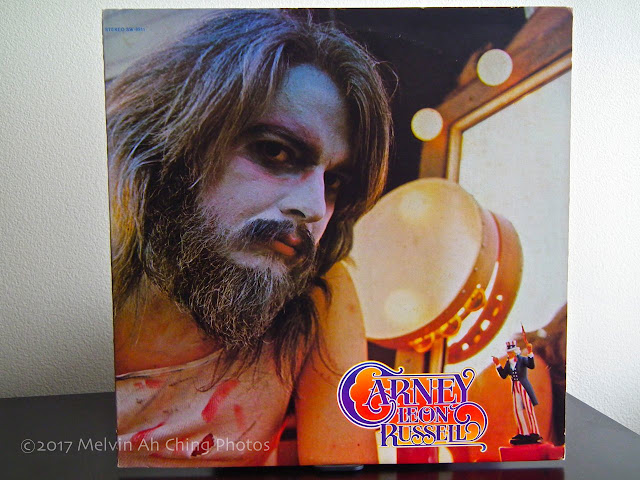 On the turntable today: Leon Russell's Carney - Shelter Records, 1972. This is a great album featuring the tracks "Tightrope", "Out in the Woods," "Roller Derby," and the original version of "This Masquerade" which became a hit later for George Benson. Strangest track? "Acid Annapolis". Russell must have been on something!

This is an enjoyable, casual period piece to listen to if you just want some music to kick back to with a carnival like twang. 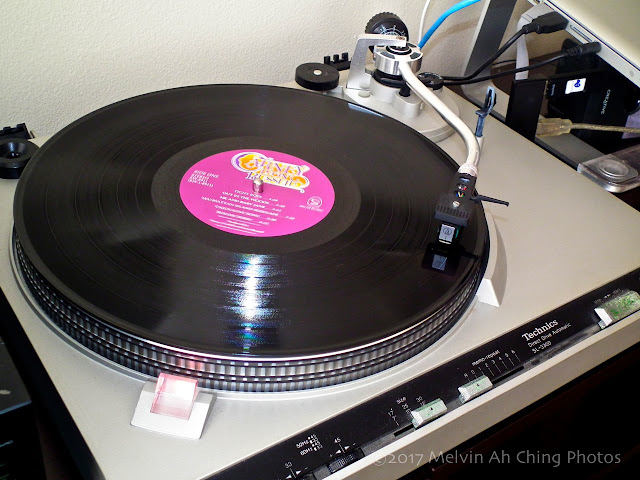 Gotta love the logotype that appears throughout the package of this LP. Side 1 features a lavender label while the label on Side 2 is green. 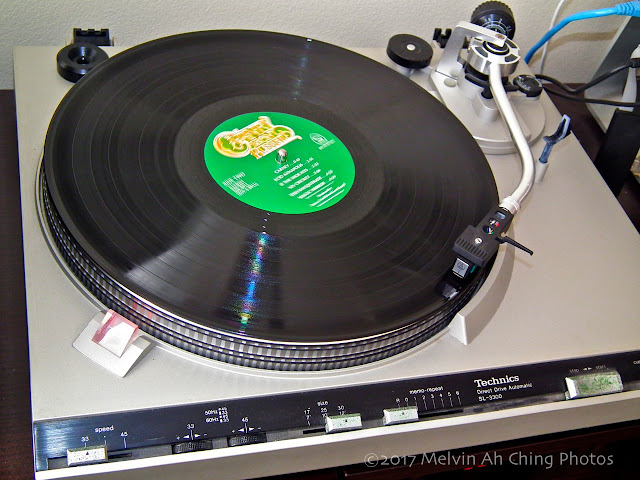 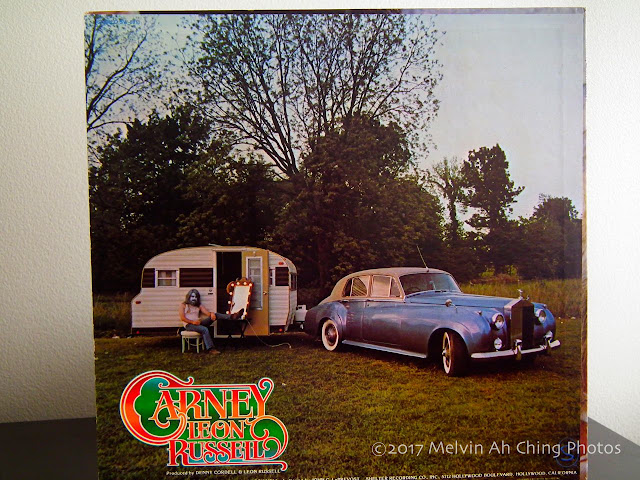 The back cover has no track list but a picture of Leon sitting in front of a camper trailer attached to a vintage Rolls Royce. Nice.

This is the album that put him on the map of popular and rock music for the next 50+ years. This album and several more that followed up to 1975 is considered to be part of the singer-songwriter classic Elton John album collection of the 1970s. The songs were well written by Elton and lyricist Bernie Taupin which finds Britain's most celebrated piano man in great voice with a solid group of backing musicians that enhanced his music through that era. 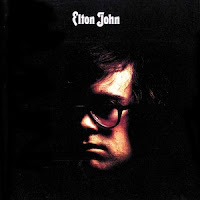 The album contains his signature track "Your Song" as well as FM classic rock favorites "Take Me To the Pilot", "Border Song" and "The King Must Die". That said my favorites are "The Cage: and the tender "I Need You To Turn To."

"Sixty Years On" is a beautiful symphonic like piece that starts off side 2 of the LP. The song is re-created in this 2002 video shot at The Royal Opera House in London England. Enjoy!

Who'll walk me down to church when I'm sixty years of age
When the ragged dog they gave me has been ten years in the grave
And senorita play guitar, play it just for you
My rosary has broken and my beads have all slipped through

Yes I'll sit with you and talk let your eyes relive again
I know my vintage prayers would be very much the same
And Magdelena plays the organ, plays it just for you
Your choral lamp that burns so low when you are passing through

Yep, got 100% on this quiz that is way too easy. I grew up in the 1970s, listened to a lot of music on AM and FM radio. KKUA, KPOI, KORL and KIKI were the top 40 radio stations of the day that played so many of these hits. I bought many of them on 45s and LP records. Made my first mixed cassette tapes. Those were the cool days.

Check the link above to take the quiz and comment below. 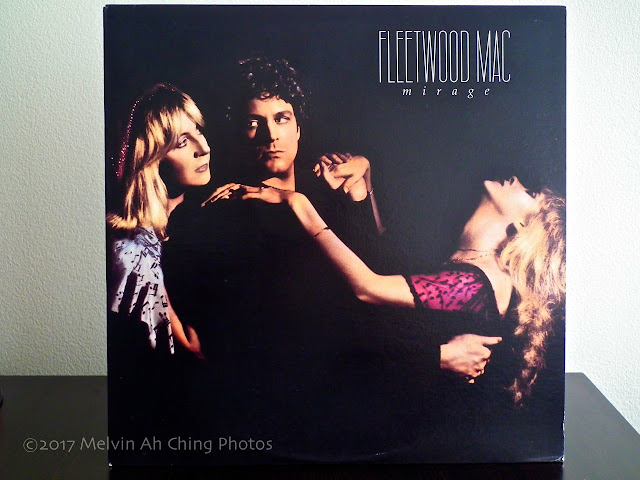 Mirage is Fleetwood Mac's first studio album released in the 1980s that features the hits "Hold Me" by Christine McVie and Stevie Nicks' "Gypsy". Both singles became big hits in 1982 in an album that to me tried to harken back to 1977's Rumours LP that sold in the mega millions and also earned the band their only #1 single "Dreams" and a Grammy Award.

However listening beyond the obvious singles, there are tracks on the album to love even more. My favorite is the retro sounding "Oh Diane" that features Lindsey Buckingham on lead vocals as well as his rollicking "Can't Hold Back". Christine is also solid with "Love in Store" and the ballad "Only Over You". There is a touch of country in Nicks' "That's Alright" while Buckingham's "Book of Love" reminds me of music from Tusk.

Overall a highly recommended but under-appreciated album from the Mac. :) 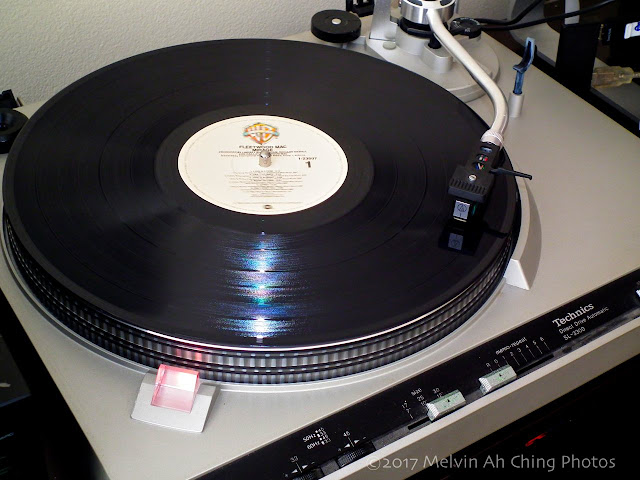 Giving Mirage a spin on the ol' Technics. 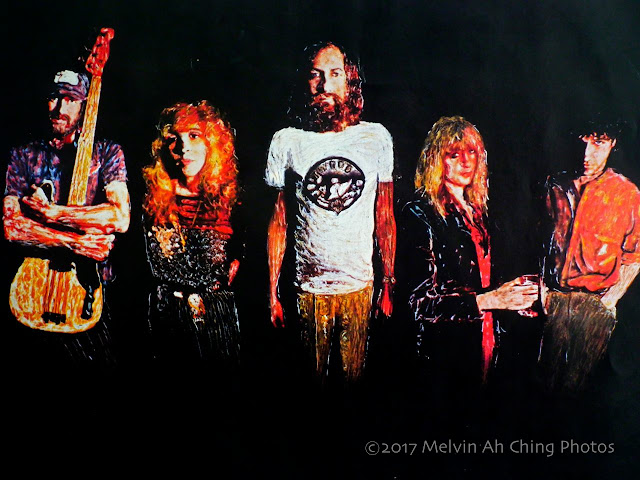 Artwork featured on the inner sleeve.

* video may be taken down without notice.

Check this out. New video for an old classic song... Hit the Road Jack. I know nothing of the artist or record label that put this out. But hey, this is a cool video. Give it a spin.
Posted by Mel at 9:46 PM No comments:


Got a piece of retro tech that I found on YouTube. Watch this guy play a couple of old records with an RCA Victor 2-speed suitcase record player from the 1950s. This thing is big and play only 33 1/3 LPs and 45s. Most record players of this vintage used to include 16 and 78 rpm speeds. I would have to think RCA was a little forward thinking with this model in the fact that it only supported the two most popular speeds that are still used for vinyl records today.

The records the presenter plays are a 45, "Love Eyes" by The Duprees and an LP track "Bye Bye Love" by The Everly Brothers. Enjoy!

Here are his notes about the record player:


Uploaded on Jun 28, 2011
Here's a scarce RCA player (as are all 33/45 varieties of this player) from the mid 50's. This is a 2-speed, 33/45 RPM player that's been rebuilt & features a Sonotone 52T stereo ceramic cartridge bridged for mono playing through a single stage amplifier and feeding a 4" speaker. It has volume control only. The DeLuxe models featured a 2-stage amplifier w/volume AND tone controls feeding a 4"x6" speaker. The mechanism was made by Crescent and used exclusively by the RCA lineup in only 9 of their players. These 2-speed players were only made for a year and not many were sold simply because there was a TON of 4-speed players available at the time this was being merchandised. While 78 RPM records were quickly fading from the scene, there were still a lot of people that had 78's in their collection and, of course, they could not be played on these 2-speed players! As a consequence, very few of these 2-speed players were bought by the public. It's most definitely a strange player! 33 RPM records could only be played as singles - one at a time. NO provision was made for stacking 33 albums on these players. However, 45's could be stacked by a special 45 RPM spindle adapter. The adapters in their own right are collectible! It's not uncommon to spend $50 JUST for an unmolested adapter simply because after being dropped, they broke into pieces and became useless. When these players are found (and that goes for all 9 varieties), the adapter is often missing or broken beyond being usable. These models are eagerly sought after by collectors because they're a simple mechanism, durable, easy to repair & maintain, one of the few with a "neutral" position to avoid drive wheel damage AND...they're scarce! I have 6 of the 9 models made by RCA. I'd like to purchase the three I DON'T have in my collection which are the DeLuxe 3-tube suitcase models w/volume & tone controls and the plastic DeLuxe 3-tube model in Coral/White combination. If you have or know of anyone that has those models and would like sell them, PLEASE contact me! I really hope you can enjoy & appreciate these wonderful pieces of 1950's history! 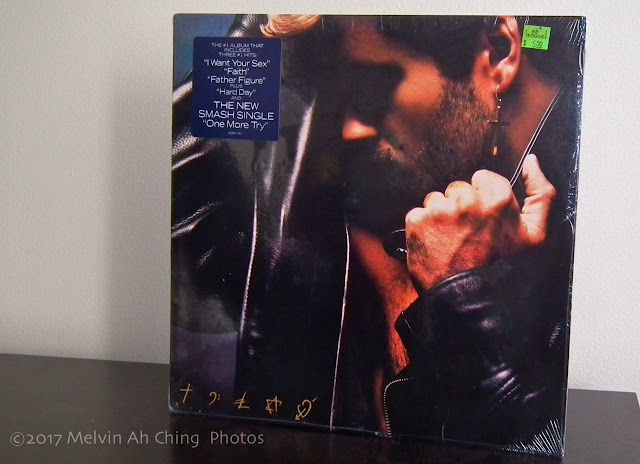 Gotta have faith, faith, faith.... yes, this was the title track to George Michael's first solo album in 1987 after he broke up with Andrew Ridgeley and the duo known as Wham. The album came out on Columbia Records and yielded several top 10 hits including the number one records "Faith," "One More Try," "Monkey" and "Father Figure".

Faith is a good album if you like cutting edge pop music with a beat that is typically 1980s. Michael at the time was regarded as a teen idol (especially when he was a part of Wham) as his videos were extensively played on MTV and other music channels of the time.

George Michael tried to break out of that mold with subsequent album releases that proved to be mostly successful.

This particular record was not played very often and is in very good condition. The album jacket is still shrink wrapped showing the original $5.00 price that I paid for it at Froggies Books and Records back in the day. I also owned the album on cassette but never got around to getting it on compact disc.

George Michael passed away on December 25, 2016 allegedly from heart failure. He was 53. 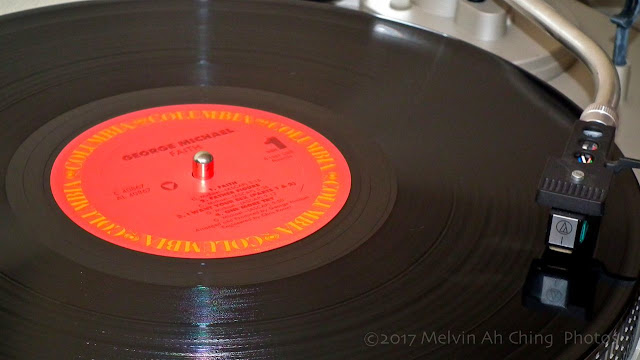 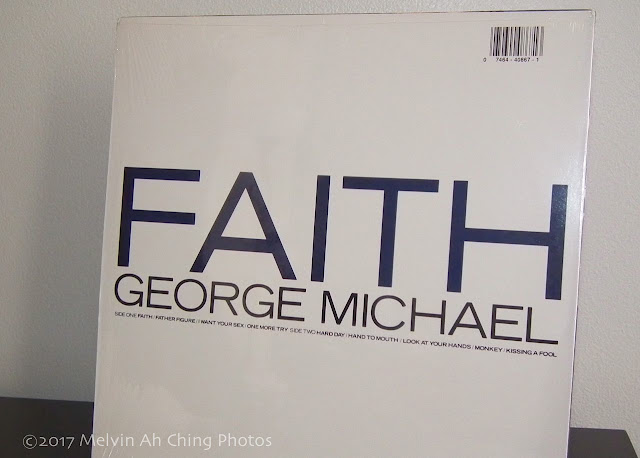 "Father Figure" was one of the #1 singles from Faith.

Today's Vinyl Spin - The Beatles "Let It Be" 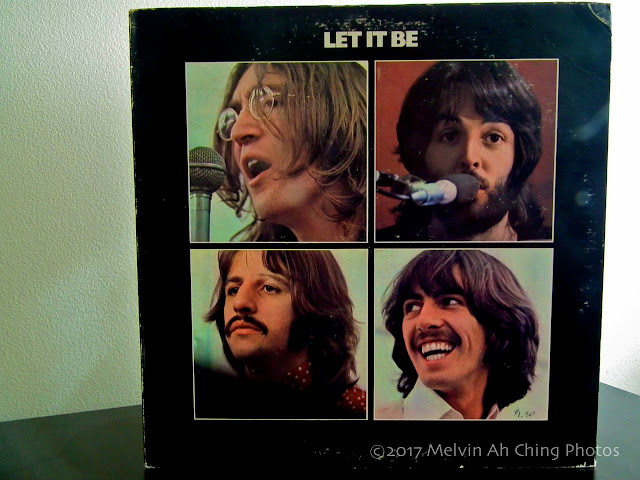 I revive this blog with a new feature called "Today's Vinyl Spin" in which I highlight any one of my many LPs and 45s collected through the years. I'll try to post at least an album a day, but can't always guarantee that.

For our first entry it is none other than The Beatles, which I and many others the world over consider the best rock band of all time. John, Paul, George & Ringo made a huge impact on the music scene when they became popular in the early 1960s and carried on as a group until announcing their dissolution in 1970. They released many memorable albums and singles through their all too short career as "The Fab Four".

For today's showcase, I am featuring the last released album of "new music" by The Beatles. It is the Phil Spector meddled recompilation of the "Get Back" sessions that became Let It Be.

On my iTunes this is the 2nd most played Beatles record I have other than the all digital "#1's" from 2004.  What do I like about Let It Be?

Well, all of the songs. The title track is a harder version than the single track, and "Get Back" is captured in its live recorded glory before it was fixed up for single release. Three #1 songs came off this album which included the title "Let It Be", "Get Back" and the group ending single "Long And Winding Road".

The album is perfectly packaged with individual photos on the front and back, track list and a gatefold inside. A red Apple label was issued for this release instead of the standard green one. Nice.

My favorite tracks are "Get Back", "Let It Be", "For You Blue," "Two of Us", "Across the Universe" and "I Me Mine". I always wondered why "Dig It" was so short. Come to find out there is a longer version but it was never officially issued.

My LP is in good, playable condition even though the cover is kind of worn. I also have it on CD and ripped to digital. 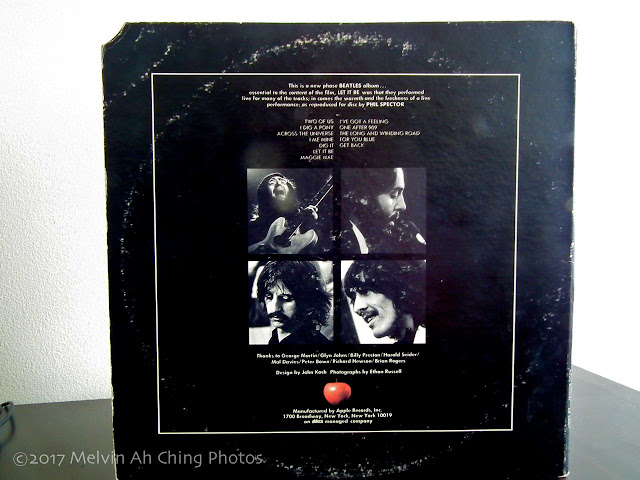 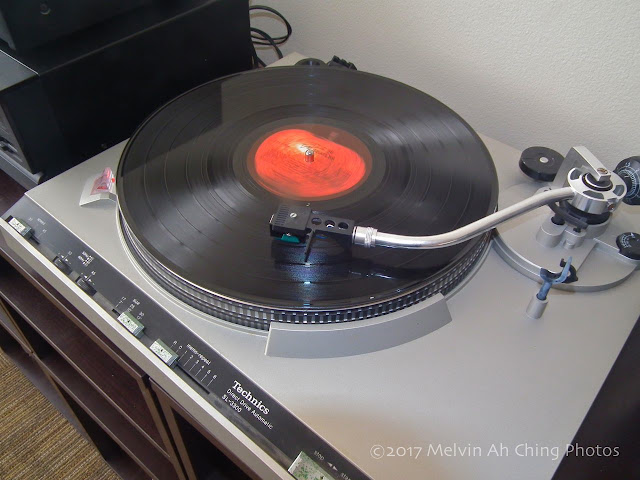 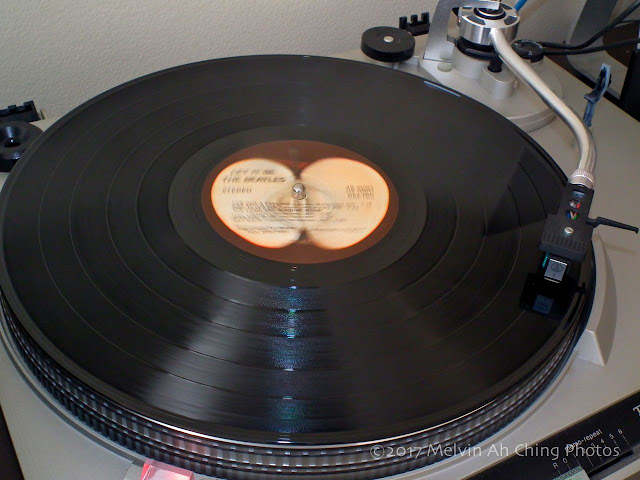 Email ThisBlogThis!Share to TwitterShare to FacebookShare to Pinterest
Labels: Beatles, Let It Be, records, vinyl

Well here is something weird from the tech front. A vinyl CD. Imagine that. Thankfully this format never caught on because the vinyl side of the recording doesn't play very well on most turntables. The CD side is typical of any other standard CD.

According to the video's author the format was a gimmick. It was introduced in 2007 but never lasted very long. Check out the video above.
Posted by Mel at 6:43 PM No comments: