Catching Up With My Charts

Train has the new #1 track this week. "Hey Soul Sister" displaces the long running "Need You Now" by Lady Antebellum at the top spot, moving there from the #2 slot last week. The latter moves down from #1 to #2. Both are great songs.

Elsewhere on the chart we got 3 new debut tracks including "Imma Be" by Black Eyed Peas, "Temporary Home" by Carrie Underwood and "Smile" by Uncle Kracker.

Doug Feiger, lead singer of The Knack passed away on February 14. He was 57 and succumbed to cancer. Sad. While The Knack's popularity was short lived, they will always be remembered for 1979's biggest power pop hit, "My Sharona." I think in modern power pop / new wave / alt rock history, no song was bigger than "My Sharona". It was #1 on Billboard's Hot 100 for 6 weeks.

The single was the lead off on side 2 of The Knack's debut album "Get the Knack" which also featured 10 other great songs such as "She's So Selfish", "Maybe Tonight," "Lucinda", "Oh Tara" and "Good Girls Don't."

I have the original album on vinyl as well as the single, "My Sharona". Back in the day when I did some "disco DJ" work, I'd play "My Sharona" at many dances just to break up the monotony of the same old beat. People either loved or hated the rock vibe that echoed on the dance floor. It was fun and signaled a change for music yet to come.

Years later I also bought the CD version of Get The Knack which was ripped into iTunes and is pictured above in this Apple coverflow sequence. 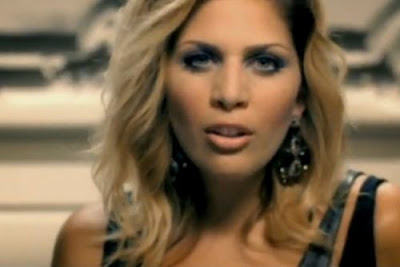 Hot on their tails are Train with "Hey Soul Sister" at #2 and "Telephone" by Lady GaGa at #3.

There are no new songs debuting on this week's chart. All 20 songs from last week held on though most changed positions either up or down. We'll probably see new music on the chart next week.
Posted by Mel at 6:00 AM No comments:

This is a remake of the original "We Are The World" written by Michael Jackson and Lionel Richie. New lyrics were added by Will I Am. Recorded by a new group of today's top rock, pop, r&b and rap artists, the song is now being used as a fundraiser for Haiti earthquake relief.

To donate all you have to do is buy the song. According to the video it's available through Apple's iTunes online store.

More information can be found at the following links:

Email ThisBlogThis!Share to TwitterShare to FacebookShare to Pinterest
Labels: "popular music", "top 40 hits", "We Are The World", Haiti

Marina & the Dimaonds' "Hollywood" is our featured video this week with the single making its debut at #19. Civil Twilight also checks in for the first week at #20 with "Letters From the Sky."

Lots of movement on this week's chart. First of all, the big leaps were accomplished by Train and Lady GaGa.

"Hey Soul Sister", a single by Train that has been lingering around since last year, debut on the top 20 at #18 last week. It leaps to #7 this week. Ditto for "Telephone" by Lady GaGa with Beyonce. That track goes from #19 to #8 this week, an eleven point leap. Can anyone say number one record? Problem is, which one, if any?

Lady Antebellum holds on to the #1 spot with "Need You Now" for the 5th week. The single is now the title track to their brand new album. Great country stuff with lots of pop crossover potential.

Up in the top 5 land, Lady GaGa moves up a point from #4 to #3 with "Bad Romance". This is a former #1 record that also stayed at the top spot for 5 weeks. Rebound anyone?

Be sure to check out our featured video, "Hey Soul Sister" by Train.