For only the second time in the history of doing this chart thing, a K-Pop song tops my Current Top 20. BLACKPINK is one of the hottest K-Pop groups from South Korea. They are a quartet of young ladies with a lot of style, sass and moves. They can also sing too.

"How You Like  That" is a very catchy song with an electro pop/dance beat. The lyrics are in broken English and Korean. Makes for an interesting mix.

What stands out the most is the very stylish music video. BLACKPINK is all about style, attitude and sass. The video brings this out in a pleasantly tasteful way, yet still makes any guy yearn to be in the presence of these women.

The music video has set some new world records for 2020:


"How You Like That" is BLACKPINK's first single from the group's forthcoming debut album BLACKPINK: The Album set for release on October 2.

"How You Like That" has gone to #1 on the charts in Malaysia, Singapore, three charts in South Korea (Goon, Goon Albums, K-Pop Hot 100) and the U.S. World Digital Song Sales (Billboard). It has been a top 20 pop hit in Japan, Canada, Australia, Hungary and New Zealand. It peaked at #33 on the U.S. Billboard Hot 100 chart last month.

Chiquis and Becky G's remake of "Jolene" got the blessing from songwriter and original performer Dolly Parton to do this song as a new Spanish language hit. It's a great cover with a good video. The record makes it to #2 this week.

Taylor Swift surprised her fans two weeks ago when she unexpectedly released a new album. Her latest album is called Folklore, and is a departure from the recent style of her pop albums of recent years. The first single "Cardigan" with its compelling video, is at #3 this week after making its chart debut at #8 last week. Could be a big hit for Swfit.

Eighty year old Tina Turner is back on the charts with a remix of her 1984 #1 hit "What's Love Got to Do With It" by Norwegian DJ and record producer Kygo. The song is a top 10 hit on the U.S. dance chart and is bubbling under the Billboard Hot 100. On the Current Top 20 it's at #10 this week up from last week's debut of #19. 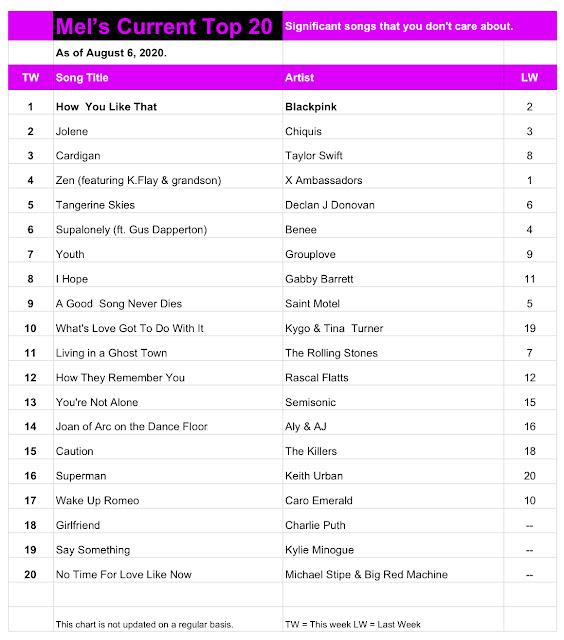