Carolina Liar tops the chart this week with their track "I'm Not Over". It's a great song!

Activate this player to listen to some of the top hits that are or have made it to this chart in the recent past.Player courtesy of Playlist.com.

Apple Inc.'s iTunes Store has been a huge success that has changed the music business. iTunes Music is Apple's popular digital download music store where for a small price, people can buy some or all of their favorite music tracks from millions of digital record albums.

When the store first started, they only sold music. The music Apple sold were from the major labels but encrypted with Digital Rights Management (DRM) copy protection. DRM sets limits on how customers can use the music they purchased. With DRM encrytion, tracks purchased from the iTunes Music store could only be used on up to 5 Macintosh or PC computers the customer owned. Tracks could only be burned to a limited number of CDs in a certain order. Tracks could be played on an unlimited amount of iPod music players, but only on the iPod. If you had something else, you were out of luck.

All that changed last year when Apple began offering DRM-free tracks from EMI / Capitol Records and a number of independent labels. A year later most if not all of the tracks offered at iTunes are now DRM free. The changeover came with a price. Tracks without DRM can be played on an unlimited amount of computers and digital music players that support the AAC format or devices supporting MP3 after the AAC files are converted. An unlimited number of CDs can also be made off of various music mixes and albums.

For customers who bought DRM encrypted tracks Apple offers an upgrade of 30 cents per track. When the upgrades were first offered, it was an all or nothing offer. So if you bought like dozens of DRM encrypted tracks and 2 years later offered the upgrade, you'd have to buy all of them again at 30 cents each. The offer sounds cheap but if you have a large library, can become quite expensive.

What I found to be a problem was there are tracks I did not want to upgrade. Between the time I first bought them on iTunes in their DRM format, I had gotten the same tracks on Compact Disc (CD) and ripped them to iTunes as MP3s. I did not need the upgraded tracks. I did not take Apple up on their upgrade offer until very recently.

After not checking the "upgrade to iTunes Plus" option for awhile, I looked at it again. Lo and behold I was surprised to find that the upgrades are now "ala carte". I can now pick and choose which songs I want to upgrade and leave the rest. This is good. I started to upgrade some of the tracks that I don't have in other non-DRM formats.

The downside of iTune's move to DRM-free music is that the greedy record labels forced Apple into accepting a tiered pricing scheme at iTunes Music. Previously all individual tracks available for sale were priced at 99 cents each. The music industry pushed many of the prices higher to $1.29 each track. That bites.

There are supposed to be tracks selling at 69 cents each at iTunes, but I have yet to see any. The higher priced tracks are not surprisingly, the latest top 40 hits through the different music genres. Some old tracks such as Journey's "Don't Stop Believing" sell for $1.29 each. What's up with that?

Needless to say, I'll tryto avoid the $1.29 tracks for as long as I can. Many of iTunes tracks are still on sale for 99 cents each.

There are also other digital music stores online. My favorite alternate digital music store is Amazon.com, where many of the tracks are priced at 79 and 89 cents each in addition to the 99 cent ones. But like iTunes, the music industry bullied Amazon into increasing the prices on some of their tracks to $1.29. Is this price fixing or what?

There are some price differences. Just today I noticed a new Green Day song called "Know Your Enemy" on iTunes. That advanced track from their upcoming new album is selling for $1.29 at iTunes. When I looked at Amazon.com, the same track is selling for 99 cents. I bought the 99 cent track even though I know that on or after May 15, I'll probably get the entire album in CD format. It seems like good old fashioned competition may be keeping Amazon to price many more of its top 100 digital tracks for 99 cents, or in some cases less. It pays to shop around.

All of this price adjustments and DRM makes me want to go back to good old fashioned vinyl 45s where for the same prices you pay for 1 digial song, you almost always got 2 songs cut on to one single disc. I miss B-sides.

Graphic: Modified screen shot of iTune Plus upgrade screen.
Posted by Mel at 4:30 PM No comments:

Shannon Hurley on the Weekly Top 20

Shannon Hurley is climbing up my Weekly Top 20 chart. This week her new single "California" climbs 5 positions from #12 to claim the #7 slot. The song was released in late February and is getting no regular airplay on AC, CHR or Modern Rock radio. I think Ms. Hurley has a real radio friendly winner of a song here. "California" needs wider distribution than through the usual online social and music networks. Radio airplay, TV appearances, sales and good old fashioned word of mouth can help this track take off.

Hurley has issued a new video for "California". It's posted at YouTube and embedded here on this page. Enjoy the video and a most beautiful song by Shannon.

Since last week's Top 20 chart was not posted to this blog, I am taking the liberty of posting 2 week's worth of charts. Just by looking below you can trace the progress of my 20 most favorite singles and tracks that currently dominate my iPod and iTunes time.

MEL'S WEEKLY TOP 20 FOR THE PAST 2 WEEKS

For the past 2 weeks Franz Ferdinand and Lady GaGa have held on to the #1 and #2 spot for consecutive weeks. Ferdinand's #1 hit track is at the top position for the 3rd week. It's not doing as well on some of the mainstream charts like iTunes. Lady GaGa on the other hand has recently topped a couple of the national charts with "Poker Face" the follow-up hit to "Just Dance" from late last year.

iTUNES PRICE INCREASE! I just noticed Apple's iTunes Store has increased the price of some of its downloadable single tracks to $1.29 each. That bites! More on the price increase in a follow-up post.
Posted by Mel at 3:00 AM No comments: 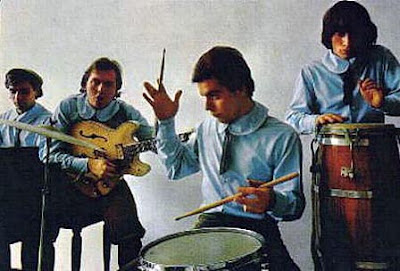 The Young Rascals were a very popular rock n roll band in Hawaii from the mid 1960s to early 1970s. They are well known for the #1 hits "Good Lovin'", "Groovin'" and "People Got to Be Free" as well as a number of other top 40 hits including "How Can I Be Sure", "Come On Up," and "You Better Run." They received extensive AM top 40 radio airplay in the day that went beyond their hit singles. Several of the Rascals' album tracks and B-sides became huge local hits and were listed on Hawaii radio charts. Album and B-side Rascals' hits included "Mustang Sally," "Sueño", "A Place in the Sun," "Almost Home" and "My Hawaii."

"My Hawaii" is probably the Young Rascals' most popular song in the islands. It topped several radio station charts in the 1960s and early 1970s compilations. The track is on The Rascals' album Once Upon a Dream which also features the hit single "It's Wonderful". For years the album had been out of print until it was re-issued to CD in 2007. "My Hawaii" is also available on the compilation CD Uncle Tom's Top Twelve Hits which was released on CD in 1998.

"My Hawaii" was covered by the local band Fabulous Krush in the early 1980s.

In recognition of "My Hawaii" being a local hit, I have been voting for it to appear on Plannine's Classic Top 30 Chart for a few weeks. It's #1 on my latest Top 10 submitted to Plannine's. That chart is posted below:

LISTEN TO "MY HAWAII" ON THIS RADIO STREAM

You can listen to "My Hawaii" by the Rascals on my 8tracks.com Classic Island Hits of the 60s & 70s webstream. This is a 10 song streaming playlist that includes "My Hawaii" among other Hawaii based tracks from artists such as Cecilio & Kapono, Kalapana, Summer, The Sweet Marie, Don Ho and others. Just click the play button below to access the stream.