The Noisettes hold on to the #1 position for the 2nd week in a row with "Never Forget You". It is a wonderful retro sounding pop/rock song. Been on the chart for more than 11 weeks now. I bought the Noisettes newest CD Wild Young Hearts. It's a great album with 10 varied tracks covering styles from retro rock to disco to torch-like ballads. Best tracks include "Never Forget You," "Don't Upset the Rhythm", "Every Now and Then" and "24 Hours". In all, 10 tracks that will keep you happy!

See the video of "Never Forget You" in the previous entry below.
Posted by Mel at 10:00 PM No comments:

One of my favorite current songs is "Never Forget You" by the UK band Noisettes. They are a three piece combo featuring the talented lead singer and diva, Shingai Shoniwa, guitarist Dan Smith and drummer Jamie Morrison. Noisettes have been together since at least 2005 and have released 2 albums and a number of singles so far.

Their latest single "Never Forget You" has been on Mel's Weekly Top 20 chart for more than 10 weeks now and has finally reached the pinnacle position of #1. Yes, this is my current favorite song despite it not getting airplay on local radio. The song is a clever melding of early 60s soul, do-wop and rock n roll with an alternative rock overlay. Great vocals, fuzzy guitars, great sounding backup singers and musicians and a feel that harkens back to music of the early and mid 1960s.

I already own the single MP3 release of "Never Forget You" and have the album Wild Young Hearts on order. Noisettes deserve a listen and this single should be a chart topper everywhere! 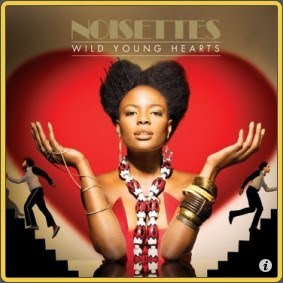 * = returned to chart after originally charting in 2008.

It's September 9, 2009 or 9-9-09. Suddenly The Beatles are new again with their entire music catalog of original albums reissued in a remastered series featuring new packaging and a video extra on each disc.

I captured the above image of The Beatles display at the Honolulu WalMart today. The CDs are handsomely packaged in cardboard eco-packs with all the graphics of the original albums apparent on the covers of each album. The WalMart prices for the single CD albums are $13.88. The White Album is $19.99 and contains two discs.

The Beatles "Past Masters" Vol. 1 & 2 have been combined into one double CD set that sells for $19.99. The album cover I saw was the white on black one used for the first volume of "Past Masters" when they were originally issued as single CDs, the second volume having a black type on white background cover.

WalMart Honolulu had this Beatles display sandwiched between the ongoing Michael Jackson sales racks... but then again, isn't the Michael Jackson estate still making money off the music from The Beatles?

I'm not buying The Beatles remasters. At least not now. But I ask, is this new set worth the price? I mean I have all of these albums on the original issue CDs and then some. Plus LPs, 45s, CD singles, cassette tapes with all of them ripped to MP3. Buying the same music all over again... is it worth the price?

The big news for gamers, Beatles fans and wanna-be's is the release of The Beatles "Rock Band" video console game to Sony Playstation, Microsoft X-Box, and Nintendo Wii today. The gaming industry which is in an economic downturn this year, is hoping this is a huge hit. The Beatles "Rock Band" certainly has gotten a lot of press and buzz. Time will tell if all the hype turn into sales.

I know I won't be getting the game anytime soon since I don't own any of the major consoles. The promotional videos for the game are quite impressive. Too bad those per song game videos can't be released on an individual DVD. It would be nice to just listen and watch. The game publishers have a whole new music video market just for The Beatles. Come on, why not?

Posted below are some clips from the games. The songs are all familiar, the videos are new.

Embedded videos from YouTube.com may be removed without notice by their respective publishers or the YouTube.com service itself.
Posted by Mel at 9:09 PM 1 comment: