After 6 weeks, the Foo Fighters have relinquished their hold on #1. Coldplay climbed up from #2 to #1 this week with their latest single "Paradise". The track comes from their latest album Mylo Xyloto, released on October 21.
Following close behind Coldplay is Lady GaGa, who's latest single, "You And I" also climbs a notch to #2 this week. As a result of these 2 moves, "Rope" by the Foo Fighters have dropped from #1 to #3.
Two new entries round out the top 5. They are "Blackout" by Breathe Carolina moving up from #6 to #4. Right behind them is Zee Avi who's track "The Book of Morris Johnson" also moves up 2 going from #7 to #5.
The biggest mover going up the chart this week is Rihanna. Her track "We Found Love" moves up 6 points from #17 to #11.
Foster the People's "Pumped Up Kicks" returns to the chart this week making its second debut of the year at #18. The song previously charted earlier this year, peaking at #2. How high will it go this time? Their last single, "Helena Beat" just dropped off the chart after peaking at #9 a few weeks ago.
Jessie J. returns to the chat with "Domino" at #20. She hit #1 early this year with "Price Tag".
FORMER #1 SONGS OF 2011

This post commences the 45 RPM Heaven series to this blog. 45 RPM Heaven is a section on my original website that showcases select 45 RPM records. By bringing this to my blog, I hope to extend this feature and showcase more 45s that I have in my collection.

Sweet Marie was a rock group that became popular in Hawaii in 1970s with their initial release entitled "Remember Mary." I know almost nothing about this group except that I really loved their 3 single hits. Sweet Marie was a heavy rockin, guitar laden combo that featured a lead singer who sounded somewhat like Jimi Hendrix. This is most apparent in their debut hit "Remember Mary," as well as on this featured 45, "Stella's Candy Store." 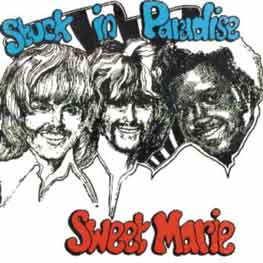 All of the Sweet Marie's records were issued on the Yardbird label out of Woodland Hills, California. I know nothing about this company and doubt that they exist today.

"Stella's Candy Store" was released in 1972 and received heavy airplay in Hawaii. What attracted me to this single was the fact that it was issued on colored vinyl.... clear red. It looked cool and the song was great! "Stella" made it to the top 10 of many local radio station charts, but as far as I know, was a hit only in Hawaii. The song was #1 on KPUA radio in Hilo Hawaii. I remember seeing Sweet Marie once on a local TV show performing this song. They rocked!

This single was issued on clear red vinyl and I am the happy owner of 2 copies of this 45. I think it is a most excellent record. The B-side to "Stella" is a track called "Another Feeling" and is somewhat laid back in contrast to the loud "Stella."

CD Availability: The album from which "Stella's Candy Store" and "Stuck in Paradise" was issued, became available on compact disc for a time a few years ago. It was issued on an independent label called Gear Fab Records, catalog number GF-172. "Stuck in Paradise" is the title of the album. This was Sweet Marie's 2nd album. The CD has since gone out of print. May still be able to find at used CD stores and possibly eBay. Used copies may also be available on Amazon.com.

Graphic Images: Top is the 45 rpm record of "Stella's Candy Store" in red vinyl. Below that is Sweet Marie's 2nd album, "Stuck in Paradise" on which "Stella" is featured.
Posted by Mel at 7:15 AM No comments:


The Foo Fighters hold on to the #1 spot for the 6th week in a row. "Rope" is now tied with Katy Perry's "Last Friday Night (TGIF)" as the only #1 song to hold the top spot for this long this year. Can "Rope" hold for a 7th week to best Katy Perry? Check back next week.
Elsewhere on the top 20, we see some or little movement and for the first time in many weeks, no new songs making a chart debut. The biggest mover is by Florence + the Machine and their latest single, "What the Water Gave Me" moving up 4 from #14 to #10 this week.
The biggest droppers this week are "Helena Beat" by Foster the People, down from #9 to #18 and "Moves Like Jagger" with Maroon 5 and Christina Aguilera dropping from #11 to #20. These two songs will definitely be gone by the next chart tabulation. Both enjoyed a good chart run.
BONUS VIDEO

And now you can be Lady GaGa.... (just in time for Halloween?)

The Foo Fighters have joined a club of exclusive #1 chart phenoms. They hold the #1 spot for a 5th week in a row with their single "Rope", the first from the album Wasting Light. What puts the Foo Fighters in good company here is the fact that they belong to a growing group of artists who held the #1 spot for more than 4 weeks this year. Among the other artists who have held on to #1 for 5 weeks (or more) are Martin Solveig & Dragonette with "Hello" @ 5 weeks, Dengue Fever with "Cement Slippers" also at 5 weeks and Katy Perrywho held the top spot for 6 weeks this summer with "Last Friday Night (TGIF)."
The fact that so many artists have held on to the top spot this week has had a limiting effect on who spent time at #1 this year. We had several songs peak at #2 only to fall away in the next week. That may be the fate ofOneRepublic's "Good Life" which holds at #2 for a 2nd week.
Moving up 5 from #8 to #3 is Coldplay as their latest single "Paradise" nears the top the week their latest album Mylo Xyloto is set to be released. Will Coldplay knock the Foo Fighters out of #1? Come back next week.
Other movers this week include Zee Avi who inches up another 2 spots from #10 to #8 this week with "The Book Of Morris Johnson," a great single from her latest album Ghost. Moving up 4 points from #18 to #14 this week we find Florence + The Machine with "What the Water Gave Me."
Two songs making their debut on the top 20 include "Not Over You" by Gavin DeGraw at #19 and "We Found Love", a dance track by Rihanna at #20.
Posted by Mel at 4:00 AM No comments:

Up at the very top of the chart we find that "Rope" by the Foo Fighters has once again held on to #1 for a 4th week in a row. Rock rules. Furthermore, the follow-up single "Walk" moves up 3 points from #14 to #11.

Red Hot Chili Peppers' "The Adventures of Rain Dance Maggie" hold at #3 for another week while Lady GaGa moves up 2 with "You And I" checking in at #5.

Three songs make their chart debut: At #18 we find Florence + the Machine with "What The Water Gave Me" at #18, Fitz & the Tantrums at #19 with "Don't Gotta Work It Out" and Alexandra Stan at #20 with the dance track "Mr. Saxobeat".

Holding at #1 for a third week in the row, we find Foo Fighters there again with their smash hit "Rope" off the album Wasted Light. Also from the same album is "Walk" which moves up 2 from #16 to #14.
Two point movers in the top 5 include "The Adventures of Rain Dance Maggie" by Red Hot Chili Peppers up from #5 to #3, "Good Life" by OneRepublic up from #6 to #4 and "Moves Like Jagger" by Maroon 5 and Christina Aguilera moving down from #3 to #5. Holding at #2 for a 3rd week is Anggun and "Only Love".
Breaking into the top 10 we find Lady Gaga with her latest single "You and I" coming in at #7 up from #13. Up 2 points from #11 to #9 is "Blackout" by Breathe Carolina.
Two songs make their chart debut. They include "Mr. Know It All" by Kelly Clarkson at #19 and "You Make Me Feel" by Cobra Starship featuring Sabi at #20.
Will "Rope" hold on to #1 next week. Come back next Sunday to find out!
Former Number One Songs from 2011:
Brighter Than The Sun - Colbie Caillat
Last Friday Night (TGIF) - Katy Perry
Tonight's the Kind of Night - Noah & the Whale
The Edge of Glory - Lady Gaga
Sad Song - The Cars
Hello (Radio Edit) - Martin Solveig & Dragonette
Cement Slippers - Dengue Fever
Price Tag - Jessie J
Down By The Water - The Decemberists
Back to December - Taylor Swift
BONUS VIDEOS

Enjoy the music. Have a great week!
Posted by Mel at 9:00 AM No comments: