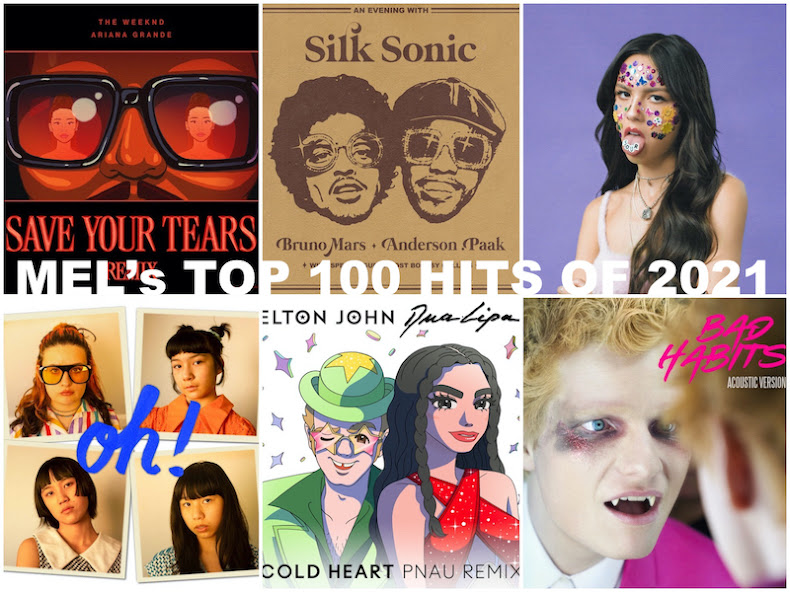 “Save Your Tears” is #1 - The Weeknd / The Weeknd featuring Ariana Grande:  The two versions of “Save Your Tears” a song originally recorded by The Weeknd in 2020 and included on his album After Hours became a #1 hit on Mel’s Current Top 20 for two weeks near the beginning of 2021. It held the #1 spot for 2 weeks before falling off and staying at #2 for four weeks.

In the meantime while it bubbled at #2, another version of “Save Your Tears”, a remix by The Weeknd coupled with singer Ariana Grande gave the song a fresh start. Since the original was still on my chart, I decided after 4 weeks to push the remix back up to #1 where it lingered for 6 additional weeks in the months of April and May.

The song spent a total of 31 weeks on the Current Top 20, more than any other to become 2021 Song of the Year.

Vocal Group of the Year: This has to go to the R&B group SILK SONIC who gave us three huge top 20 singles in 2021. Led by vocalist/musicians Bruno Mars and Anderson .Paak they led 2021 off with a great 1970s sounding throwback single, “Leave the Door Open”. That song held oon to the #1 spot for 4 weeks on the Current Top 20, and spent 23 weeks on the chart to put the single at #2 for the year.

Silk Sonic wrapped the year up with two more Top 3 singles that included “Skate” and “Smokin’ Out The Window”, both of which peaked at #3 and stayed on the chart for a dozen weeks each.

Punk Band of the Year: Definitely goes to The Linda Lindas who broke out with a huge viral video hit called “Racist, Sexist Boy” that was shot live in a library within the Los Angeles area. That song put them on the map and spent a few weeks on the Current Top 20 peaking at #14, which was enough to squeak in a position #100 on this chart.

In the summer their first official single “OH!” issued by Epitath Records hit my Top 20 chart and soared to #1, staying there for four weeks. It spent a total of 15 weeks on the top 20 which was good enough to land at #4 for the year.

Darling of the Media Award: That has to go to Olivia Rodrigo, a young singer who probably help put rock music back on the map. Her first breakout song was “Drivers License”. It quickly picked up streams, video views and radio airplay. It climbed my chart to make it to #1 in the first half of 2021. It spent 2 of its 15 week chart run at the top, making it to #14 for the year.

All of her charted singles were taken from her debut album Sour.

A Big Year for Elton John: Did you know Elton John is 74 years old? Well he came back in a big way in 2021. Elton has always had some kind of song on the charts since he first started in the business in 1970.

For 2021 he managed to put five singles into the Current Top 20. They include “After All,” a duet with Charlie Puth that went to #13, “Finish Line” that pared him with Stevie Wonder, with the song going to #12 at the end of the year. He was featured on “Nothing Else Matters” a Metallica cover song fronted by singer Miley Cyrus in which Elton, Yo Yo Ma and several other musicians had prominent roles as back-up musicians. That record peaked at #8 on the Current Top 20.

I thought in mid 2021 his big comeback was with singer Rina Sawayama, whom he did a duet with on her track “Chosen Family”. That record put Elton John and Sawayama into the Current Top 20 Top 5. “Chosen Family” peaked at #2 for two weeks, spending a total of 12 weeks on the chart, which was enough to land the single at the #19 spot on the Top 100 chart.

Elton John’s biggest hit of 2021 was to come later in the summer when a PNAU remix called “Cold Heart” which moshed several of his older hits together into a medley, was done as a duet with pop diva Dua Lipa. That record came out in August, peaked for 3 week at #1 in September and has managed to hang on to the chart for 18 weeks and still listed going into 2022. For the year “Cold Heart (PNAU remix) ends up at #5 for 2021.

All of the Elton John tracks are featured on his 2021 album titled The Lockdown Sessions.

Elton John was not done. In mid December he released a holiday track with Ed Sheeran. That song, “Merry Christmas” got to #5 after three short weeks on the chart, and is still listed as we move into 2022. Therefore it will likely show up on next year’s Top 100.

Other Comebacks: Adele came back with a new album in late 2021 called 30. It yielded the #1 hit “Easy on Me” which ended up at #8 for the year. Two more singles came off the album charted in the final weeks of the year.

ABBA returned to making a few more hit records this year with the release of their first album Voyage since 1982. Three singles made The Current Top 20 chart. They were “Don’t Shut Me Down” (#2 peak), “Just a Notion” (#7 peak) and “I Still Have Faith In You” (#10 peak). All three are in this year’s Top 100 Hits of 2021. This is probably the last songs we’ll ever get from the aging pop group, who have mostly been in retirement since 1982.

Paul McCartney, Ringo Starr, Ed Sheeran, Coldplay, AC/DC and the Foo Fighters all had comeback hits for 2021. At least one song from each of them are on the Top 100.

Finally K-Pop: Several K-Pop songs made an impact on the Current Top 20. They included “My Universe” which is a Coldplay single featuring the boy band, BTS. That went to #1 for a few weeks here.

Those are my highlights for 2021. The entire Top 100 of 2021 is a highlight in its own right and a good memory jogger for the year gone by.

It is hopeful that more good music will be released in 2022. The songs are out there.